How to Homeschool without Warping Your Kids: Adult Grads Report Back (I of III)

In this series, I discuss a concern that I've lately heard expressed by veteran homeschoolers and homeschool graduates. Part I examines the issue of fearful and prideful judgmentalism, and argues that it is a problem of which Christians (especially Christian homeschoolers) should be both aware and wary. Part II looks at parenting choices that can exacerbate or cause this problem and discusses reasons why parents fall into those traps. Part III looks at what parents have done to raise pleasant, successful children who are able to speak the truth in love and to remain faithful to their values without fearing or mocking others. My research included contacting a range of homeschool graduates in their twenties and thirties. They gave me fantastic advice and insights that I am eager to share. Note: I am writing from the assumption that homeschoolers have already proven themselves both academically and socially, and that home education is a wonderful parenting option. 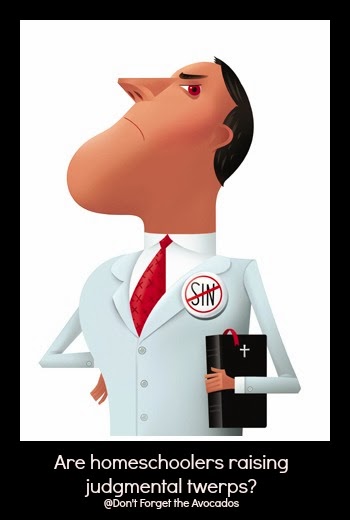 A lot of people think that Christians are stuck-up, arrogant, judgmental, sour, and hypocritical; quick to condemn others in order to feel better about ourselves. They think that we go around burning books and spitting in the face of the poor, or that we seek nothing more than to control the universe with our own tyrannous rules. Why do we have such a bad reputation? Recently I listened to a discussion that focused on three main reasons for this. One: sometimes the sinful world is simply reacting in defensive anger to a good and holy law that would restrict their preferred activities (rather like a child who screams, “I hate you!” when his mother forces him to go to bed on time). Two: sometimes the world does not understand the difference between judgment and judgmentalism. Christians may simply explain the contents of our beliefs, and our listeners may assume that we are doing so in order to condemn them. Three: sometimes Christians totally deserve that reputation. Unfortunately, we too are sinners, and our own pride and lack of love can make us obnoxious.

I remember talking with a young Jewish man who had a visceral, emotional reaction against the word “Christian” because the Christian clique in his high school had seized every opportunity to express contempt for non-Christians. Apparently one of them once walked up to him in the hallway and said, “You’re Jewish, aren’t you? You’re going to hell.” The Christian then strode away. It is a horrible thing when the sins of us Christians get in the way of the Gospel that we all (pagan, Jew, and Christian) need desperately. It is the sort of thing for which millstones are prescribed. Nowadays, the need to focus on speaking the truth in love, and to teach our children to do the same, is heightened because of the fractured culture in which we live.

It is fantastic to live in a society where we can enjoy everything from curries and burritos to biscuits with gravy. We can learn Scottish country dance or belly dance. We can study Japanese from a neighbor or teach English online. Yet the diversity of the modern world extends beyond food and into the realm of values and beliefs. The more our values and beliefs contradict each other, the more someone must be wrong, and the more we grapple with the thorny issue of judgmentalism. Judgmentalism is not a problem in areas of agreement (you can safely insist that your small child may not run into the street, or that it is wrong to mug old ladies). However, it is a huge issue in much of modern life because our areas of agreement have shrunk. All parents believe in something, and all parents want to transmit those beliefs to their children. Yet every belief implies a judgment. If I feel that avoiding animal products is ethically necessary, I can’t feel very appreciative of my leather-clad neighbor who’s currently eating force-fed chicken on his front porch. If I believe that sex before marriage is wrong, I can’t approve of the couple who is shacking up across the way and posting anti-virginity jokes on facebook.

There is, of course, nothing wrong with trying to find and apply truth. We must do that. We must also teach the truth to our children even if our neighbors disagree with it. However, problems develop when the way that we teach truth creates an unchristian and unpleasantly prideful attitude. Fashionable as it may be nowadays to accuse anyone who believes anything of being judgmental, that doesn’t mean that judgmentalism cannot exist. It does. It can make quite nice people behave nastily, it can cut people off from legitimately acceptable life choices, and it can be a major impediment to sharing the Gospel. Basically, it is a manifestation of our sinful human nature. Let us define judgmentalism as feeling that because one happens to be right, one is therefore smarter and of greater worth than are those in error. It also includes feeling that one should guard moral truths by building helpful “protective” rules around them and by enforcing these new rules as zealously as the original truths (this usually leads to despising fellow believers who do not follow our made-up rules).

The unique opportunity of homeschool parents comes with a unique challenge. In order to transmit truth to their children, such families have chosen to step outside of mainstream culture, and are more able to control their family’s environment and experiences. Their kids grow up without being bombarded by the over-sexualization of modern life and without being pressured to conform to an often unhealthy pop culture. They are able to develop strong family bonds and to use their learning time more efficiently. This is wonderful. However, nothing in earthly life comes free, and there is a flip side. Because the family’s choices have heightened the cultural differences between themselves and the mainstream world, they are presented with even more opportunities for judging others. This can make them vulnerable to judgmentalism. Because such families may feel defensive about their lifestyle or eager to ensure that their children never abandon it, they may teach moral purity in a way that leaves the children treating the impure with fear, scorn, or mockery. This is far from a Christian attitude. Yet our sinful human natures are so tricky—so devious—so prideful—that bad attitudes blossom in the home of the best-intentioned Christians. None of us will ever achieve moral perfection (that’s why Jesus had to die for us), and we must all repent daily of sinful pride, but we can also analyze the parenting styles that heighten this problem and the ones that successfully discourage it. 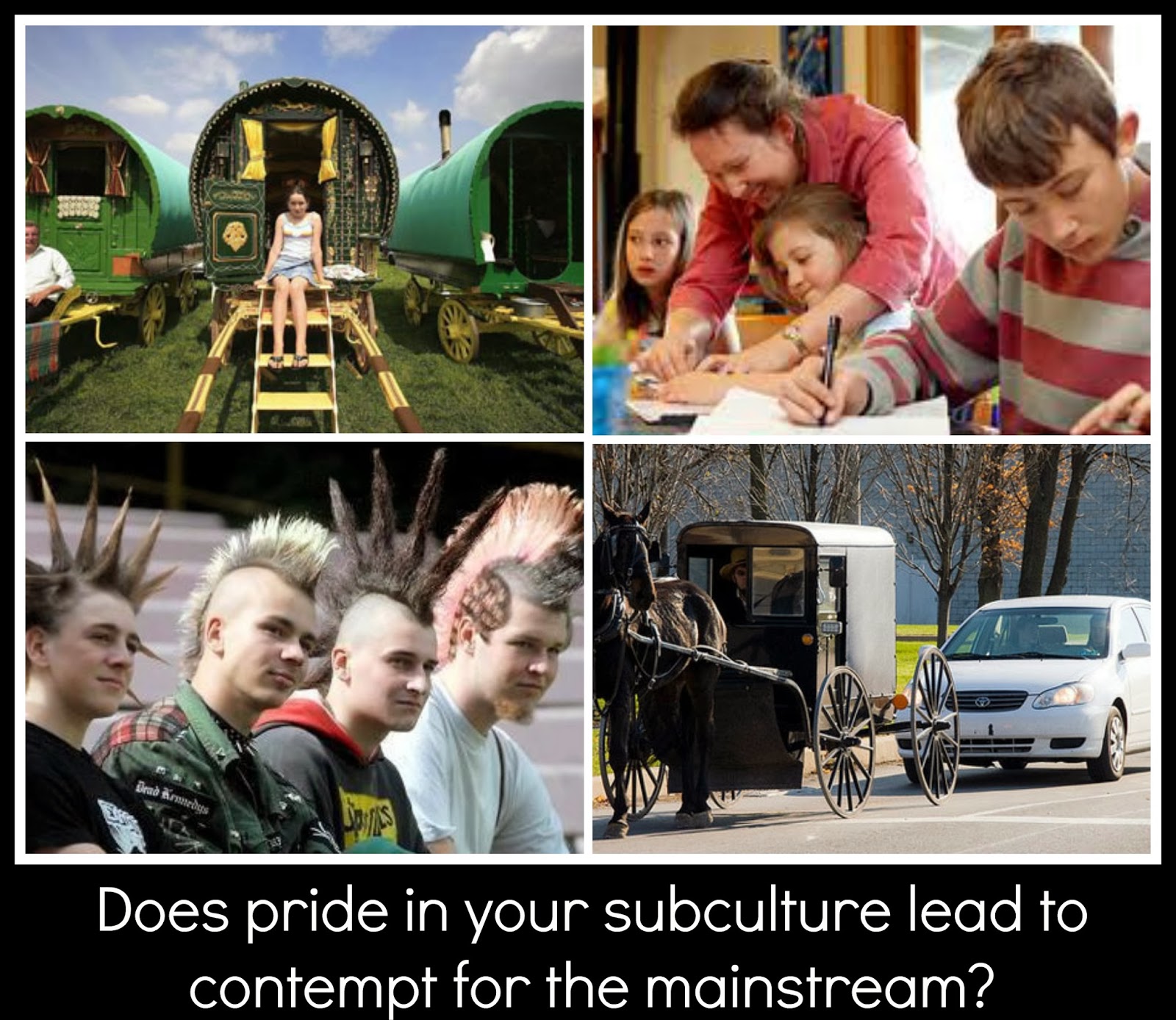 Unfortunately, those of us who grew up in the (mostly fundamentalist) homeschool culture have witnessed families who handled the transition from homeschooling to adulthood badly, and whose grown children were overly ignorant, fearful, and judgmental, and therefore struggle to succeed outside of their parents’ living rooms. I’ve seen young people afflicted with the following problems:

1. They are unable to get a job, because they fear that spending time with fellow employees who are non-Christians might be too corrupting (and/or they automatically reject all further education for the same reason).

2. They cut off friendship with anyone who appears to have sinned, and their conversation is full of scornful judgment on anyone who does not conform to their extremely narrow, rigid idea of what a Christian life should be like (for example, girls who wear pants instead of skirts, families who allow video games, or individuals who fail to shun family members who divorce/live together before marriage/die their hair purple, etc.).

3. They do not think that they can learn anything of value from the mainstream world (including the medical community, higher education, or historic church tradition) and focus only on their own home and family to the exclusion of personal growth or missionary efforts.

Obviously, such examples are fairly extreme, but moderate homeschool families can also be guilty. “Moderate” youth may still correct others or fight for truth in the public arena because of pride instead of love for their neighbor (unfortunately, this attitude will show through to the world, and may cause others to reject Christians as arrogant and unloving). It is important to look honestly at how our children view others and to consciously teach humility along with truth. Recently, I contacted a range of homeschool grads in their twenties and thirties. I asked what is helpful (or destructive) in the way that homeschool parents prepare their children to engage with the mainstream world. Their answers are fascinating, and I will be quoting them extensively during this three-part series.

For now, I’d like to provide one example (emphasis mine):

“Some families do successfully teach their children right from wrong without scorning wrongdoers.  And it is because parents do more than just teach the Law; they teach the Gospel, too.  They emphasize Christ’s work of forgiveness for our sins and that we now live in His forgiveness.  This understanding that we live in Christ’s forgiveness ultimately helps children treat the wider world with compassion instead of scorn.  They understand that others need Christ’s forgiveness as much as they do.  Also, they understand that the best way to proclaim it is not through withdrawal but through acts of mercy in the world. Other families, who do not understand the importance of teaching both Law AND Gospel, consequently teach fear and harsh judgmentalism to their children.  They focus only on what is right and wrong.  When someone—whether that is a family member or another person from the outer community or world—falls into sin, the parents respond in criticism and scorn, either turning their backs on the sinner or accusing them of their sin.  They do not realize that at the same time they are also withholding the sweet words of Christ’s forgiveness.” [Lydia]

Lydia's comment highlights the Christian parent's challenge. We want our children to speak courageously and truthfully to the world (even when that means delivering the Law). Yet we also want them to live in the Gospel and to model God's mercy, love, and forgiveness. This is an era when many people do not even know what "Christian" means. Our kids have a tremendous opportunity to demonstrate what Christians are like and to break down anti-religious stereotypes through relationships with people in the world. Yet it cannot happen if our kids remain cloistered away, full of fear, instead of growing up and taking their place "in the world," even if they are not "of it." Of course, it also cannot happen if our kids go out to do street corner preaching but are judgmental twerps.

Judmentalism can seem like a love of what is good. In reality, it is the refuge of moralists who want to assure themselves of their own goodness by pointing out how much worse everyone else is. The tragic thing about moralists is that they are cutting themselves off from the blessed mercy of God by focusing only (or mainly) on themselves instead of on His promises. Next Tuesday, we will look at specific parenting problems that seem to lead to moralism and judgmentalism.