1 a :  a literary, artistic, and philosophical movement originating in the 18th century, characterized chiefly by a reaction against neoclassicism and an emphasis on the imagination and emotions, and marked especially in English literature by sensibility and the use of autobiographical material, an exaltation of the primitive and the common man, an appreciation of external nature, an interest in the remote, a predilection for melancholy, and the use in poetry of older verse forms (from Marriam Webster). 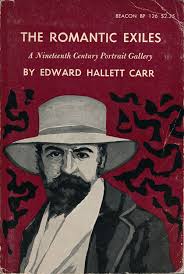 The Romanticism of the Nineteenth Century wields enduring influence. It still shapes our approach to romantic love, our application of democracy, and our definition of art. To understand Romanticism is to better understand our own culture. Carr’s book illustrates a fairly extreme branch of Romanticism that resembled the cultural turmoil of the 1960’s. Free love, substance abuse, and political activism—it was all there in the 1800’s. However, it was lived-out in fancier clothes and with a better vocabulary.

Carr offers a personal picture of various revolutionary-minded Russian exiles who published newspapers and pamphlets while wandering through Europe (Czar Nicholas II had no tolerance for even the faintest whiff of criticism against his government). I had not previously realized that European Romanticism, unlike the nature-loving, fairly apolitical Romanticism of the English-speaking world, was intrinsically a political influence.

The book centers around Alexander Herzen and his immediate circle. He and his fellow exiles attempted to conduct their romantic and sexual lives in accordance with the principles of novelist George Sand (she taught the primacy of emotion-driven love and the folly of societal strictures like loveless marriage). Boy, did that cause them a lot of grief. Imagine the following scenario: a man and woman conduct a “spiritual” and physical affair. Their spouses find out about it. The woman’s wronged husband offers to free her. She refuses to leave him, because she loves both men, and decides that it would kill her noble husband to be abandoned. The man’s wronged wife keeps urging the woman to run off with the man, because he will get tired of her more quickly that way. Everyone exchanges many long, emotional letters and the two men talk darkly of duels. The adulterous man is shocked-- horrified-- overcome by the unkindness of the wronged husband, who cruelly returns his (the man's) letter of justification unopened. Their community decries the possessiveness of a husband who would hold his wife to marriage vows against her will. The woman still refuses to leave her wronged husband but "can't" give up her correspondence with her lover. Wronged husband sends letters to their community in justification of his own position. Sides are taken. Friends of wronged husband knock man down stairs. Man indignantly denies that this undignified hallway proceeding ever happened, and claims that he instead sent his assailants running. The adulterous woman in this tale is Alexander Herzen's wife.

Much of this book is told through the letters and memoirs of the people involved. The personal and anecdotal style made me feel almost as if I were eavesdropping on a T.V. reality show. Yet it is enlightening to see how the values of this mini-sexual revolution played out in a world that was still far more conservative than ours.


The second half of the book focuses more on the political scene. Alexander Herzen and his friends were idealists who espoused noble and lofty goals. They had all suffered persecution under the government of their Czar (simply being associated with someone who wrote a revolutionary pamphlet was enough to get a young man exiled to a backwards province for years-- and writing a letter that happened to criticize the police was a good way to lose your job and, again, achieve exile). Yet they were members of the educated class and, in some cases, the Russian aristocracy. Believing in the brotherhood of man did not force Herzen to free all of his serfs. For some years he was a prominent figure in the international community and his publication enjoyed a widespread audience both in Russia and throughout Europe. Eventually, however, his kind of thinker was replaced (and ridiculed) by anarchists and revolutionaries who preferred violence to intellectual magazine articles. It is quite fascinating to read about the generational shift that eventually led to the bloody events of the Russian Revolution. Yet the moral and political values of Herzen's crowd did not entirely die out. I understand Romanticism better for having read Romantic Exiles.

What is genuine is proved in the fire. ... in the end, one will be found among us who will prove that the sword of enthusiasm is just as good as the sword of genius. Engels, Anti-Schelling (1841)

Linking up to: Saturday Review of Books
And What We're Reading Wednesday