How to Write Romance without Annoying Me 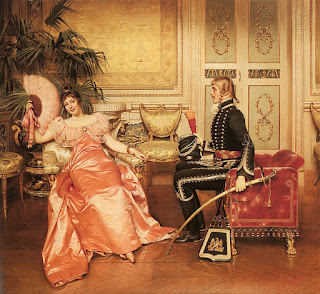 I hear that the romance genre sells more books than any other. It makes sense, I suppose. Women like romance. Even I like romance in real life. After all, my husband is both sweet and good looking. I even enjoy observing other people's romances (I will be attending a dear friend's wedding soon, and oh how happy I am for her!).

I don't like most romance novels, though. Mostly I content myself with saying politely that I am not their target audience. I really don't get why people enjoy reading... well, you know what these books are like! Some women find relaxation in the soothing predictability of implausible characters behaving in unrealistic ways. If I want something soothing, I'd rather watch the Great British Bake Off.

On the other hand, what would stories be like if they didn't involve human relationships? Many of the best novels in the world involve couples who end up married. I'm all for those books.

I can't pretend to speak for other readers. However, I can speak for myself. Here's how to avoid making me annoyed with your story.

1. Never Make Me Feel that the Author is Drooling Over the Male Lead

Sometimes I am reading along, enjoying the developing relationship between the love interests, when all of a sudden male lead walks by, and apropos of nothing, the author pauses to mention the way his trousers fit or the way his shirt drapes his torso. No. Wrong, wrong, wrong.

If you are writing a book and you want readers to know how unusually developed the character's musculature is, make it fit subtly into the context. For instance, "Although he is the same height as his cousin, his chest and shoulders are twice as broad. There is no way he could have borrowed Reginald's shirt for the party as he told the police inspector after the brutal murder of the girl in the spangled orange dress."

2. Make up Your Mind About Whether or Not the Obstacles Between the Couple are Real

It's a convention, of course, that a pair of obviously-unsuited-but-passionately-interested people should spend the whole book believing that tremendous obstacles make their relationship impossible. Then the climax comes. They kill the bad guy or find the diamond or win the race. All of a sudden they fall into each other's arms. Dude! Come on. It's a bad convention.

In Pride and Prejudice, the obstacles between Elizabeth and Mr. Darcy are overcome not by his successful rescue of Lydia, but by the character change they have both experienced. Darcy's willingness to help Lydia simply illustrates and proves that he has changed.

If the barriers between your couple are psychological, please make sure you know how and why the couple overcomes them. Show that to the reader ("because the author wants them to end up together" is not a valid reason). You can't replace character development with a really cool fight scene at the end. If you do, I will be annoyed and want to thump you with my copy of your book.

I've been reading John Truby's book on writing, and he points out that many authors mistakenly attempt to make their characters vivid by giving them lots and lots of random characteristics and traits. Randomness isn't terribly effective.

Specifically, a huge percentage of female leads in romances are labeled "intelligent," "tough," "successful," and so on by the author. The author tries to prove these labels by making the heroine someone who has clawed her way up the ladder in a challenging profession. Doctor, lawyer, merchant, chief. Yet the heroine spends the whole story acting in a way that is counter to her stated personality and worldview. This is hard to do well. Instead, please make your characters' personalities part of the plot. If you make them the kind of people who would probably do the things they do (and then, to be really interesting, make them change), I will be happier. Thank you.

Everyone sleeps together before marriage, right? Nope. They don't.

In a historical setting, the presumption would be safer the other way around. In fact, in light of the pervasiveness of the morals and manners of her own era, your heroine is probably no more likely to engage in such activities than you are to make racist jokes in public or to take up smoking for your health. Should you be determined to impose your own values on her, you need plausible reasons and should portray plausible consequences. How would you feel if you started "talking racist" because your new lover thought it was a great way to get rid of inhibitions? Yeah, I hope you'd be pretty uncomfortable. So would she.

Love is really a wonderful thing. It's serious enough that we should handle it, even in fiction, with respect. That's why the world needs good, non-annoying romances.