An Old-fashioned Way to Broaden Our Perspective on Love 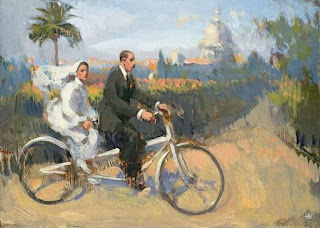 What is this narrative? It is that of responding to pain by "taking control" of our life and making changes. We adore the moral superiority of change.

It almost doesn't matter what the change is. Lose 100 pounds. Win the contest. Get a makeover with a new wardrobe and makeup. Go skydiving. Quit corporate life and become an entrepreneur. Get divorced and find new love. Just, for heaven's sake, do something.

Often, of course, human beings need to be prodded out of ruts for our own good. Yet the modern narrative about change obscures the idea that real change requires long-term dedication instead of just a big burst of dramatic action. It suggests that rather than changing ourselves from the inside, we need to change ourselves through our circumstances. We need a divorce and skydiving lessons.

All of this clouds our ability to see that when it comes to love, sometimes patience and endurance are actually the more moral choices.

Recently I stumbled across a secular review of the Christian movie Fireproof. (For anyone unfamiliar: it's an Evangelical Christian production about a firefighter who "accepts Christ" while attempting to rescue his dying marriage. Yes, it's a cheesy script with B acting). However, what struck me was how the secular reviewer interpreted the message on marriage. The reviewer said, "Marriage is portrayed as tough and often devoid of love, affection, or respect, but something that Christians are expected to endure anyway." It's a surprisingly grim-sounding summary of a story with a happy ending.

Even though the protagonist of Fireproof is able to save his marriage after completely humbling himself and showing sacrificial love to his wife for a period of time, the reviewer isn't happy. He complains that "The burden is on [the protagonist] to turn the other cheek as [his wife] spurns him again and again, with nobody calling her on her own questionable behavior."

If people are always taught to fix their problems by changing their circumstances, we lose the ability to see that sometimes, our job is to do the right thing in tough circumstances even when it doesn't seem to be working. Even when it's not fair. Even when the other people around us aren't supporting our choices and desires.

Popular culture demands that life be good and happy right now. It can't see the moral virtue in failing to dump a spouse who isn't being nice, regardless of the reasons.

The old-fashioned view of love and marriage is different. It brings a much broader perspective. It sees life not as a single moment in time that ought to be happy--and, if not, ought to be fixed--but part of a bigger picture. It suggests to us that before we demand a divorce and skydiving lessons, we might look at ourselves and repent of our own failings regardless of our current circumstances.

An old-fashioned appreciation of endurance allows us to say sorry even if the other guy won't. It allows us to wash the dishes even if our spouse doesn't take out the trash. Ultimately, unlike an addiction to change as the solution to unhappiness, it can actually free us from our circumstances. That's a pretty liberating thing.