A "Strong Female Lead" Who's Actually Strong Instead of Annoying

I just finished W. R. Gingell's Masque. (If you haven't read it yet, you should--it's incredibly fun. What sane person wouldn't love a retelling of Beauty and the Beast that's also a murder mystery set in a fantasy world full of fabulous fashion and dangerous magic? It's not just for girls, either. My husband had a hard time putting it down.) 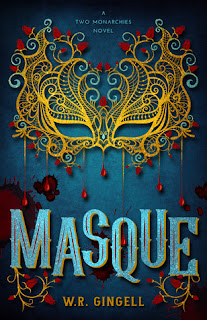 I've been thinking about the heroine. In this day and age, most authors recognize the need for the obligatory Strong Female Lead and declare their heroine to be, you know, strong. Yet a lot of those SFLs are flops. Often they become an excuse for lazy storytelling because they are allowed to "get away" with choices and actions that would be called-out as immature in a male. Isabella, the protagonist in Masque, is not at all a flop. Why?

Most protagonists who fit under the SFL label do so either by virtue of martial prowess or through having a strong-willed, impulsive personality with a formidable temper.

Isabella is not martial. She does have a very strong personality and is essentially impossible to stop once she gets an idea in her head. Other characters sometimes call her enraging, stubborn, etc. Yet she is not driven by whims. She has, in fact, great self-control. The author makes the point several times that Isabella holds her temper on a very tight reign--she refuses to let herself remain angry or to speak in anger. In fact, if she believes she has overstepped and hurt someone's feelings or been unfair, she immediately--and disarmingly--apologizes. All of this makes her role as a professional diplomat much more believable.

Key point: Isabella's will is a true strength because she has it under control instead of being controlled by it.

Hand-in-hand with her self-discipline, her inner moral compass plays a significant role in defining her character. Although on the surface of the story she has a good deal of fun chasing the murderer, she is clearly driven by much more than a desire for a good time. When necessary, she makes sacrifices (even of her ability to pursue her investigation!) for the sake of people she cares about. Not only does this bolster the idea that she is a strong female lead, it also makes it more credible that the male hero would be attracted to someone he finds so frustrating.

Ultimately, Isabella is strong not because she insists on her own way but because she has self-control and tries to do what is right. That, I think, is why Masque is so satisfying even though it isn't intended to be taken very seriously.

And by the way, as I said at the beginning of this post, you should read Masque.