“If you find that the reader of popular romance— however uneducated a reader, however bad the romances—goes back to his old favourites again and again, then you have pretty good evidence that they are to him a sort of poetry.” C.S. Lewis

Sometimes the idea of beginning a new, untested piece of fiction, with its unpredictable emotional impact, can be off-putting. It can feel like too much of an investment. Too much of a gamble. At times like those, I turn to the top left-hand corner of my bookshelf. That is where I store a trusty collection of paperback mysteries. They provide soothing bedtime reading and pleasant entertainment for a rainy Saturday. Almost all of them were written by my five favorite mystery authors. I cannot promise that they are the best mysteries in the world, but they are excellent companions. You should read them.

Soothing or not, she really does qualify among the best detective fiction writers of all time. She was an academic, a feminist of sorts, an author, and later a convert to Christianity who rubbed shoulders with the more famous religious writers of her generation (such as C.S. Lewis). Her Lord Peter Wimsey novels were written between 1923 and 1937. Lord Peter also appears in a generous collection of short stories (you can read some of them free online).

Lord Peter is a foolish-looking member of the British aristocracy who solves mysteries, collects antique manuscripts, and occasionally suffers from a relapse of his World War I shell-shock. As he ages, the style of the books changes dramatically. The first few are rather simple “puzzle mysteries.” Our sleuth is an interesting protagonist, but experiences little psychological development (indeed, he is almost like a better-educated and more intelligent version of Bertie Wooster). However, Lord Peter attends a murder trial in Strong Poison, and sees Harriet Vane in the dock on trial for murder. He decides that he must marry her. From then on, the books increase hugely in complexity. The last few deal with the intense conflict between freedom, intellectual achievement, and love. Murder Must Advertise is probably my absolute favorite.

Just for fun, a quotation from Dorothy Sayers about how she made Lord Peter wealthy:

After all it cost me nothing and at the time I was particularly hard up and it gave me pleasure to spend his fortune for him. When I was dissatisfied with my single unfurnished room I took a luxurious flat for him in Piccadilly. When my cheap rug got a hole in it, I ordered him an Aubusson carpet. When I had no money to pay my bus fare I presented him with a Daimler double-six, upholstered in a style of sober magnificence, and when I felt dull I let him drive it. I can heartily recommend this inexpensive way of furnishing to all who are discontented with their incomes. It relieves the mind and does no harm to anybody. 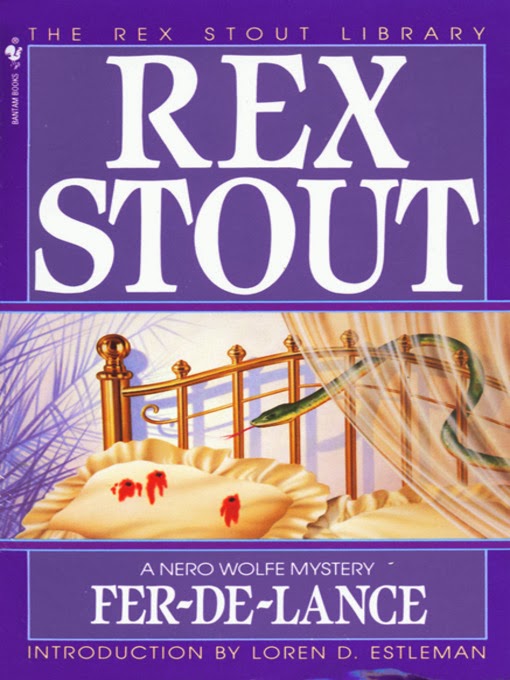 Rex Stout’s Nero Wolfe mystery series (written between 1934 and 1975) is fantastic. P.G. Wodehouse loved rereading them. Need I say more? The novels are all written as stand-alone stories in which the characters never age or substantially change. Almost all of them occur in New York. Although they can be read in any order, I didn’t care for the last few—the atmosphere of the 1970s just doesn’t suit the characters as well as does the immediately post-World War II ethos.

The adventures are narrated by Archie Goodwin, a cocky young man who serves as assistant to the enormously obese and brilliant Nero Wolfe. Because Nero Wolfe rarely leaves his brownstone dwelling, it is of course imperative that he have an assistant to do the actual footwork when solving a crime. Archie likes admiring pretty girls, drinking milk, and using his muscles against men who attempt to thwart his detective work. He writes with a hilarious style. Wolfe and Archie are excellent foils for each other and engage in so much witty banter that it’s a wonder the books don’t explode. My favorite is Some Buried Caesar, and Fer-de-Lance is also very good.

Dick Francis served as a World War II RAF pilot, a jockey to the Queen Mother, and a prolific writer who authored more than 40 international bestsellers. Ironically, he was offered a ghostwriter for his first book (and turned the offer down). His mysteries don’t pretend to be literature, but they do show the mark of both a good writer and a perceptive observer of human nature. Many are set in the dangerous world of steeplechase horse racing. Although modern, Francis’ books are generally clean and his heroes always upright. Written between the 1960’s and Francis’ death in 2010, the mysteries do contain some reflection of Britain’s social changes and become more explicit about the characters’ sexual encounters (which remain tastefully off-camera). His protagonists are very British. They keep a stiff upper-lip, endure physical injury if necessary, and are better listeners than talkers. They also cannot stop themselves from stubbornly pursuing the truth when faced with corruption or crime.

My favorite is probably For Kicks, in which an Australian horse-breeder goes undercover as a stable lad to discover how a rogue group is managing to “fix” races. Once on the job, he discovers that the previous investigator was murdered. In addition he must deal with the impact of pretending to be someone that he is not. I also recommend 10 LB Penalty, the story of a young man who attempts to protect his politician father from a long series of attacks. This one is not only clean enough for younger readers, but also demonstrates significant maturation of the character as he forges an adult relationship with his father.

Ellis Peters (the pen name of Edith Pargeter) is one of the weaker links on this list. Her books are sometimes so predictable that I can actually announce the name of the murderer before anyone has been killed. However, I’m rather good at that kind of predicting.

The quality of her Cadfael series is uneven. Brother Cadfael is a former crusader, an herbalist, and a Benedictine monk who solves murder mysteries during the tumultuous twelfth-century conflict over England’s crown. Cadfael himself is a likable character, and his setting is fascinating. I recommend One Corpse Too Many (the best of the series, and one of the first). It's the one that I consider well-worth owning. EDIT: My husband would also like to recommend Ellis Peters' A Nice Derangement of Epitaphs, which has a modern setting and a pleasingly clever plot.

MacLean fought during World War II in the Royal Navy. Afterwards, he put in a stint as a school teacher before becoming a writer. His stories are thrillers. Adventures. Nothing profound or deep about them. However, he usually writes with beautiful sentence structure. Why can’t the thriller-writers of today spice up their silliness with attractive grammar? I might like Stephen King better if he wrote with MacLean's sentence structure. I did most of my MacLean reading in high school and therefore cannot fully vouch for it today. Don't bother with Ice Station Zebra-- that one is actually boring, despite the interesting and constant use of the phrase "ice spicules." However, I recently reread Partisans, and it is hilarious.

Here is the Wikipedia plot summary:

During World War II, Pete Petersen, a Yugoslavian agent with an unlikely name, and his team of compatriots cross war-torn Yugoslavia to deliver a secret message and unmask a double agent. It is not clear who Petersen is actually working for, as the plot meanders through the confusion of Yugoslavia's three-way civil war, with Communist Partisans, the Serb royalist Chetniks and the Croatian fascist Ustashe fighting as much against each other as against their Italian and German occupiers. Everyone's loyalties are uncertain. Obviously, the sardonic Petersen is not working for the Nazis, but what about those with him?

I’m not sure that the book is supposed to be funny, but it is. It fits every stereotype of the vintage, World War II adventure—strong, silent protagonists who can hit a moving Nazi at 1,000 feet while using their free hand to pouring whisky over the wounds from their recent beating; beautiful but not entirely clever girls, and lots of bad guys. Also lots of ice and snow. It’s a good book.

Linking-up with Moxie Wife for Five Favorites! Head over to see other lists.