When Your Characters are Like Evil Robots: Thinking About Storytelling

(Ha! I'm back! I have grandiose plans of posting once a week again here, but I also sort of think that I'm going to write lots of articles for The Federalist, keep posting on Sister, Daughter, Mother, Wife, finish my novel, make a quiet book for my son--I've pinned all these ideas on Pinterest--and also decorate the house for Advent. While pruning a zillion bushes in the yard. So, yeah. I get these delusions of grandeur whenever the three-month-old falls asleep for ten minutes). 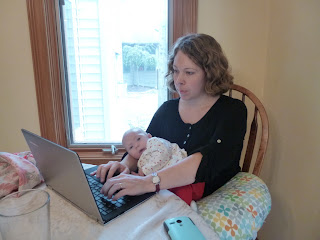 I've been reading books on my Kindle and pondering the wherefores and how-is-it-done's of fiction. I really loved Amends (review here) and The Dean's Watch (review here). They are polar opposites as far as tone, setting, and style go; but at the same time both convey the sense that their authors are compassionate people. I, too, would like to write as if I understand the fundamental flaws and human ugliness in my characters, yet love them anyway.

I have also been reading a few books that aren't as expertly written. One (a retelling of St. George and the dragon, set in the twilight-years of the Roman Empire and involving persecuted Christians and a pagan priestess) is constructed upon a fun and engaging premise. I want to like it, and I will probably finish it just to see how the author brings his ideas to completion. My problem is that I read for style and literary value as much as story. Maybe more. Because of that, this book doesn't work for me.

I found myself complaining to my husband (poor man) about a number of little issues within the book, and eventually, I realized that they probably all stem from the same problem. So many things happen in the book--the antagonist launches into action, characters join forces to travel together, someone helps our protagonists, etc.--for no good reason. That is, as a reader, I feel as though they happen because the author wanted them to, rather than because they grew organically from the things that had already happened. If that makes sense.

It's not that the author fails to provide any ostensible motivations. We are, for instance, told that the antagonist "hates" the protagonist and see that they have a rivalry. Unfortunately, the level of dislike that the author shows us (during a boyish insult-fest in the street) isn't enough to explain why the antagonist would jump from saying, "Your father is a coward" to deciding, "Today I will kill your mother." And killing the poor lady. And that's just the start of his aggression.

My guess (unless the second half of the book reveals a backstory heretofore unhinted at) is that the author doesn't really know why the antagonist would do such a thing. Not in an in-depth way (the way that the author of The Dean's Watch would have known). He simply needs his antagonist to get the story started. It's an easy trap to fall into. My own novel is not exempt from this problem. Clearly, I need to spend a lot more time trying to know and understand all of my characters. Then I will need to spend a lot of time learning to succinctly show their feelings and motivations. Hmm. This book of mine is going to take a long time to write. Even then, who knows if it will be any good? But, of course, all I can do is try. And keep writing.