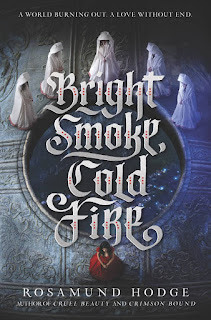 It's Romeo and Juliet, but in a pagan world full of human sacrifice, clan rivalry, and hungry zombies. Despite Rosamund Hodge's undeniable flair with words, her third novel has generated quite a few negative reviews on Goodreads. No wonder: she takes significant risks with this story.

Risk one: This volume is only the first half of the tale and ends on an extremely dark note (all the good guys seem to be doomed). In a book so full of blood and suffering, the ending is not an easy pill to swallow.

Risk two: The nature of what it means to be pagan (i.e., to lack any concept whatsoever of cosmic mercy) is not sugar-coated. This allows the author to explore fundamental questions but also makes the story uncomfortable.

Risk four: The author spends a great deal more time developing the characters' same-sex friendships/alliances than building the romance [a choice for which I commend her: modern fiction is awash in romance but weaker on friendship].

Because the book doesn't conform to the typical expectations of readers, it is, quite simply, harder to read. And of course without the ending, readers can't tell yet whether it is worth the effort. I've seen what Rosamund Hodge can do, and I'm willing to wager that even though the world of this book is a tough one to enter, the experience will ultimately be worthwhile. Besides, I really like both Paris and Romeo. I hope they make it.

I have some other thoughts on other aspects of the story, but I'll save those for another post.